How to take off a shirt.

A review of the CURRENT SESSIONS Volume III, Issue I. 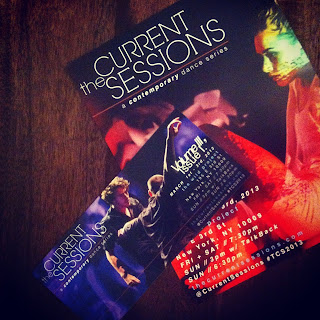 The care of movement is the respect of dance. Purpose and clarity expand and fill in the moles and scratches that lay in the wake of hard breathing and unhinged limbs. In Lucy Guerin’s “Untrained,” performed at BAM in the winter of 2012, the dancers each take off their shirts while describing their actions in great detail. “I hook my thumbs under the collar like so…. I cross my arms and pull upwards…” The act of taking off their shirt becomes a codified magnification of the mundane, mesmerizing because the dancers invest full attention in the fingers, the skin of the fingers, the edges of their fingernails.

Their touch is a dance, and the CURRENT SESSIONS contained many such attuned performers and mature choreographers within its programming, which included 17 presenting artists, 3 movement workshops and a talkback.  Curated by creative director and producer Alexis Convento, co-creative director Allison Jones, and others, SESSIONS’ aesthetic, from graphic design to selected choreography, is of the hip and subtly provocative.

I will fall in love with sensitive fingers, skin and nails every time.  The dance of sensitivity requires authenticity and challenges audience expectations of what is physically alluring. This understated provocation works and should be practiced heartily.

It is, in Brendan Duggan of LoudhoundMovement’s “Tempered Skin,” Chihiro Shimizu’s “one hundred lies to tell you the truth,” Grace Courvousier’s “Fresh not Frozen,” and in Allison Jones’ “HYPOMANIAC!” From the looseness of Duggan’s dancers’ joints – femur folds in the hip crease like the folding of a wet dough– to the stuttered “I love you” that closes the piece, there is no hardness that implies insecurity. Shimizu, who performs in the duet alongside Chuck Wilt, is a calligraphic structure of sharp bones paradoxically traveling in swooping lines. The dual nature of Shimizu’s performance continues when she is pulled briefly out of a placid moment by a provoking hand gesture from Wilt. She responds with an unguarded, teeth-baring grimace that disappears before it registers. Animal, immediate.

It’s worth noting that this same tactility and responsiveness is familiar choreography. In my review of the last CURRENT SESSIONS, I wrote “the thighs splayed wide in fourth position, teasing the floor with the crotch. This is pure Gallim. Or, Gallim reflects a contemporary dance scene that is rapidly turning the new into the normal.” Allison Jones brought the crotch low, with choreography that bursts and sinks in opposing and dynamically invigorating impulses; Shimizu and Duggan pulled energetic strings from the air that evoked some of Miller’s adagios.

If you wittingly or unconsciously echo another choreographer, Gallim is a good bet. I’d rather watch the same graceful, honest dance 1,000 times than watch movement that numbs the body’s impulses. Kate Ladenheim’s “Spin Cycle” includes a repetitive vocabulary in which dancers mime daily actions – riding the bus, taking a shower, putting on a shirt… The dancers put on their shirts with an uninvolved swoop of their arms in no particular pattern or adherence to reality. There is no study and there is no interest in the visceral movement, and such disinterest reveals itself in the abrupt transitions in the piece. Donna Salgado’s “Working Walls 2,” attempts to integrate African, Salsa, yoga and contemporary dance within the confines of ballet. No style is accurately represented and instead the movement is a facsimile of generalizations of each style. The disparity between Guerin’s intensely studied performance of getting dressed and these echoes of style aligns with the audience’s corresponding interest (or disinterest) in them.

Courvoisier’s “Fresh not Frozen” was an outlier in this program, and might be forgotten except that it imprints with its simplicity. Dancer Julia Radomyski’s urgent tapping of her breastbone. Her incessant, skin-reddening rubbing of the face. Her arcing wrists as they sweep upwards, only stopping when bone meets bone at the apex above her head. This is what I remember, and what is important, along with the feeling of anxious passion that Radomyski physicalizes, while maintaining her natural grace. More theatrical than sensitive, more subtle than miming, “Fresh not Frozen,” sandwiched between hugely ranging styles of dance, exemplifies CURRENT SESSIONS’ good taste within many genres.

Sunday’s afternoon program, one of 4 distinct performances within this CURRENT SESSIONS, also saw choreography by many other artists. A Parisian-costumed Alexander Dones performed another random assemblage of voguing, popping, whacking and contemporary dance. Also highlighted in the program was a dance for camera, capturing the beauty of the body encased in the beauty of a sandy, golden shore, directed by Ruben Graciani, and the most linear piece in the program, “mujeres” by Enza DePalma, which found strength in spatial patterns and pulsating movement.

Posted by sofia strempek at 6:36 PM